In 2010, following the Michael Wood 'Story of England' TV series about the history of Kibworth through 2,000 years of history, Kibworth Improvement Team (KiT) were formed. KiT applied for a grant from the Heritage Lottery Fund and were awarded £48,200 for a number of heritage related projects, including the production of a free Kibworth Guide Booklet containing updated heritage trails for Kibworth Harcourt, Kibworth Beauchamp and Smeeton Westerby. Copies are available from Kibworth Library and Dr Kevin Feltham. 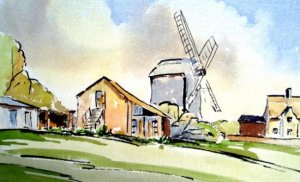 The above watercolour of the post mill on Langton Road is reproduced by kind permission of the artist Michael Edwards.