The Kibworth Joint Recreation Committee was formed in 1982 by both Kibworth Parish Councils in order to administer the public recreation facilities in Kibworth. Today the Committee manages and maintains the recreation grounds of Warwick Park and Smeeton Road, and the Play Areas at Rookery Close and Larkswood. These areas are owned by one or other of the two Parish Councils, except for Warwick Park (formerly the Warwick Road Recreation ground), which is now owned by both parish councils (November 2015) after being purchased using s106 funding. It used to be on a joint lease from Kibworth High School Foundation. Leicestershire County Council was the Trustee and acted as landlord in the leasing arrangements.

Following new audit regulations, both parish councils were advised in 2017 that joint committees holding bank accounts, assets and employing separate clerks, were no longer permitted. Following elections in May 2019, processes were set in motion to draw up a Memorandum of Understanding in 2019 that set about moving all assets, bank accounts for the joint recreation to be the responsibility of Kibworth Beauchamp Parish Council, but with representatives from Kibworth Harcourt Parish Council helping to make decisions about joint recreation. The new arrangements took effect on 1 April 2020 and the name of the committee changed to the Kibworth Joint Recreation Board.

The Committee comprises of representatives from Kibworth Beauchamp Parish Council (May 2021 - currently Councillors Pat Copson (chairman); Barbara Strevens, John Hooley and Jon Owst), and from Kibworth Harcourt Parish Council (Councillors Kevin Feltham (vice-chairman) and Caroline Pitcher. Some 5 or 6 meetings are held each year in Kibworth Grammar School Hall with additional meetings called if necessary. Recommendations from meetings will be ratified at the following Kibworth Beauchamp Parish Council public meeting and the joint work summarised at both parish council meetings.

Warwick Park: On Wednesday 18 November 2015, the Chairs of the two Kibworth parish councils (Chris Wood for KBPC and Kevin Feltham for KHPC) signed documents that transferred the ownership of the historic Warwick Road Recreation Ground to the people of both parishes forever. This historic event followed many years of discussions with Leicestershire County Council, and more than a year of detailed negotiations. The transaction has been managed by the Kibworth Joint Recreation Committee which is made up of councillors from Kibworth Beauchamp and Kibworth Harcourt, and which looks after not only the Warwick Road land, but also Smeeton Road, Rookery Close and Larkswood. It means that the future of the land, how it is used and how it is looked after is now for the people of the two Kibworth villages to decide. It will continue to be managed by the Kibworth Joint Recreation Board. In March 2020, the Joint Recreation Committee approved changing the name to Warwick Park in recognition of the Beauchamp family, later Earls of Warwick, who originally owned the land.

Allotments: Kibworth Joint Recreation Board has acquired land and converted it into sixty community allotment plots, all of which are now bearing fruit. For more information please check their FaceBook page here.

Enquiries concerning KJRB responsibilities or activities should normally be made to the Clerk, Maria Smith, email clerk@kibworthbeauchamp-pc.gov.uk. 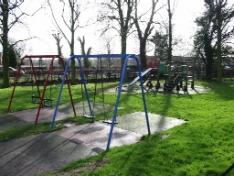 RT @HarbCSP: It's ASB awareness week - Summer is a time to be enjoyed by all, so it is important to be tolerant of the occasional BBQ or party. If your neighbours are getting a little loud, ask if they'd mind keeping it down - they may not realise it's so loud #SaferSummer @HarboroughDC

RT @hatterneil: Bit of hail where I live then 😬