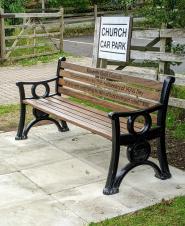 Today a new bench has been unpacked and installed. It is a new VE/VJ 75th anniversary commemorative bench on Church Road. This bench was funded by money granted to the two Kibworth Parish Councils by Harborough District Council to celebrate VE Day. The two parishes worked together & pooled the two amounts to buy & install this bench. Thanks to Cllr Hooley for sorting the engraving & the delivery of the bench and to Cllr Munro who helped Cllr Feltham and Steve Brown, street orderly, to get the bench into position. Cllr Munro and Cllr Feltham then exhausted so had to try it out!

RT @KibworthChron: Litter Blight!
We all should take pride in where we live. Don't leave it up to someone else
bit.ly/344gdLt

RT @kibcomlibrary1: As part of the government's Test and Trace program we have
now got our own QR code!

RT @hfmnews: Six parts of the Harborough District have been identified as ‘hotspot’ areas due to rising cases of Coronavirus - more on Hfm News & here: harboroughfm.co.uk/cor…